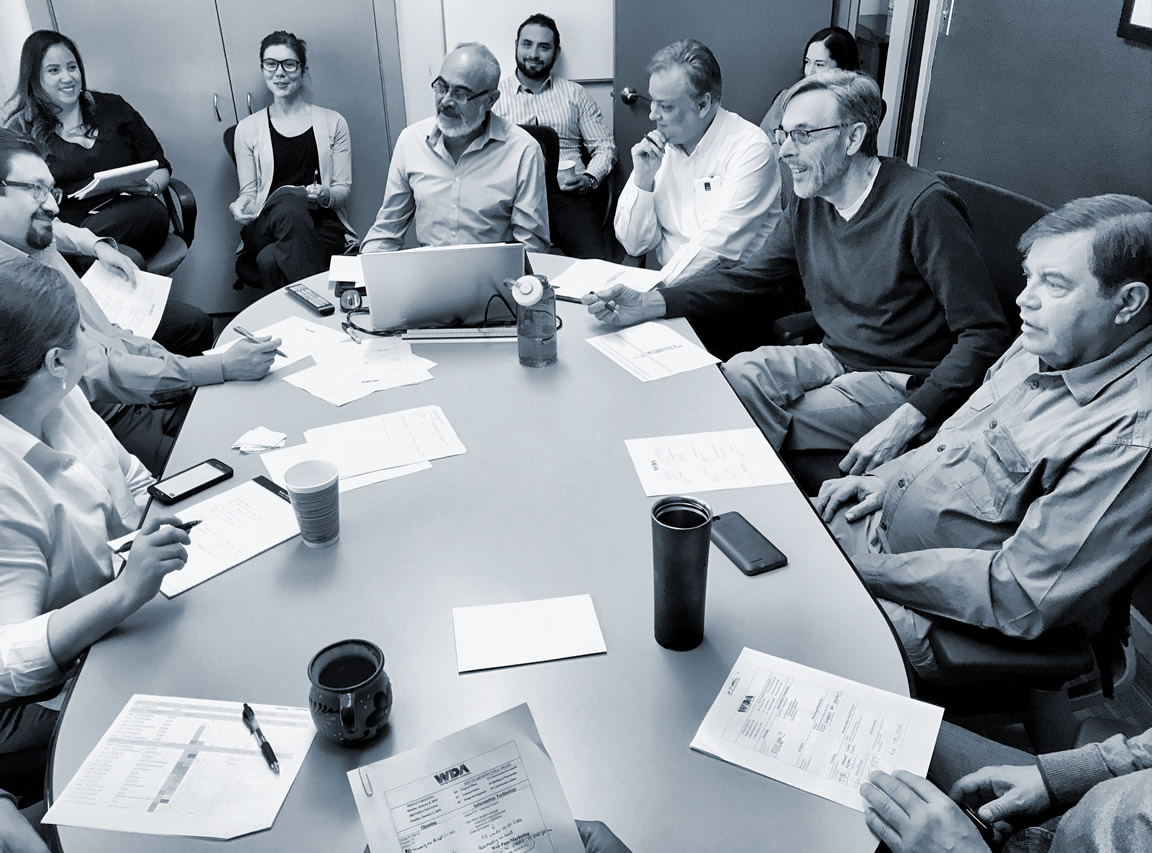 Geoffrey Wright has been a registered architect since 1978. He is principal architect for Wright & Dalbin Architects, which he founded in 1986, after having served as head architect for Condel Architects and Engineers. Geoffrey Wright previously served as Chair of the El Paso City Plan Commission and was vice chair of the Historic Landmark Commission, as well as other City boards such as the Building Board of Adjustments, the Building and Zoning Advisory Committee and the Public Utility Regulatory Board.

Frederic Dalbin was born in Barcelona, raised in Mexico City and Paris and made El Paso his permanent home in 1984. A registered architect in the U.S. since 1987, Frederic has regularly worked with governmental entities such as the City and County of El Paso, Housing Authority of the City of El Paso, Housing and Urban Development, the US Army Corps of Engineers, University of Texas at El Paso and various school districts. He has also worked with non-profits such as the YWCA, TVP Non-Profit and Opportunity Center for the Homeless.

Morris is an award-winning architect licensed in Texas since 1982, a Fellow in the American Institute of Architects and a Distinguished Alumnus from Texas Tech University College of Architecture. He ran his own office for many years as well as serving as operations manager for a native American architecture and engineering practice in El Paso. For the past eight years he has been Interim Director and faculty member for the Texas Tech University College of Architecture and is currently a staff member of WDA.

Manuel Venegas has served on the Architectural Registration Board for Cd. Juarez, Chihuahua and has worked with Wright & Dalbin since 1987. His expertise includes participation in the design and construction documents of numerous projects, including five-star hotels, offices, apartment complexes, retail and industrial buildings, and custom built homes. With 30 years of experience in the field of architecture, Manuel Venegas has been instrumental in the design and construction on a considerable number of projects.

Having worked in the field for over 20 years, Ruben Villalobos has broad experience in design, production, specification compliance, and construction administration. He is currently working as Project Manager for several new commercial and institutional projects, as well as multiple remodeling projects, which include the Opportunity Center for the Homeless’ William Sanchez Rosales Family Center, El Paso Villa Maria Improvements and HACEP Rio Grande 3 multi-family housing community renovations.

A graduate of Universidad Autónoma de Ciudad Juárez, Jessica has over 10 years of experience in the use of architectural software programs for the development of MEP and architectural design and construction drawings, primarily Revit and AutoCAD. She has been involved in various military-government, healthcare, industrial and educational projects. She is currently assisting on the EPISD Austin High School renovation, as well as multiple HACEP RAD projects. An RA in Mexico, she is in the process obtaining her licensure in Texas.

Claudia is a recent graduate of TTU College of Architecture at El Paso and is currently pursuing her Master of Architecture at Boston Architectural College. She is excited to begin her career at WDA, where she has made herself a valuable member of the team by contributing on various projects from multi-family to tenant improvement. Although her experience is just beginning, she has a strong ambition to continue her education and further pursue the road to licensure. As an El Paso native, one of her goals is to contribute to the improvement and development of this great city.

Raul is a graduate of Texas Tech University College of Architecture, El Paso Community College and Franklin High School. With multiple years of experience with the firm, Raul offers a modern and innovative approach to some of our most prominent projects, such as the historical O.T. Bassett Tower Renovation and the Cincinnati Street Landscape Improvements, as well as various institutional and residential projects. Due to his passion for design, Raul is currently attending Boston Architectural College to obtain his Master of Architecture and plans to eventually become a Licensed Architect.

Eduardo obtained his Bachelor of Architecture in 2012 from Universidad Autónoma de Ciudad Juárez. Since then, he has acquired experience as an architectural designer and detailer in residential, urban, landscaping, and interior design projects and is proficient in AutoCAD and Revit software. As a recent member of the WDA team, he is looking forward to continuing his education and gaining knowledge on his way to licensure.

Allan holds a Bachelor of Architectural Science from Texas Tech University and is currently pursuing a Master of Architecture degree from Boston Architectural College. Having been a member of WDA since 2017, he is currently assisting on several projects, including Extra Space Self Storage, EPISD Hughey-Ross, School of Science and Technology, and OLO Gallery. He also has multiple years of relevant professional experience in which he mastered a series of broad and dynamic design skills by managing different programs. Allan plans to become a Licensed Architect in order to contribute to the innovation of architecture as well as construction areas.

With over 15 years of accounting and budgeting experience within the architectural and construction service industry, Tony is responsible for all accounting functions to include tax compliance, asset management, managerial and financial accounting. During his tenure at WDA, Tony’s duties have expanded to include contract administration, as well as human resources and general office management. A lifetime resident of El Paso and a family man, Tony enjoys community engagement having served on the Board of Directors for the Hanks Football Boosters, Thunder Sports Club, and The El Paso Chapter CSI. He is currently assisting La Familia de El Paso and the 5 Points Development Association.